So I have just come from reading this regarding Amazon and I have a little tale about all of this for WordPress admins.

I realize this is a time of Media Giants, and frankly, I like this one the best because I started here.  So it’s not clear what is actually going on with that company.  Especially if you were an author who put a book up for sale in there, which I did.

How I go about marketing or selling anything in the future is going to be here in WordPress, and I’m not sure about Twitter.

It was in 2007 that I found WP through a Google search on politics, and I made a blog.  Hard to believe it is that long ago.  I’m going to show you an experience I had in the era 2016, and I am still not sure what to make of that.  I prefer the reality based web.  What I mean by that is that I know who Matt is, not just because of news stories I followed but because of this great company.

Like so many we are looking at the news today on these tech giants so I will say what I use them for.  In Google I search for breaking news, daily.  I would also tend to use Google if I needed to search for things, doing that with search strings of “WORDS” so lately I have been doing that same thing in Facebook, and also in Twitter.  I used that here yesterday and today in WordPress to watch a presentation the founder and inventor of WordPress made at that WordCamp in Europe.  It was great to be able to see that here, “inside” WP itself.

I had WordPress first.

The share buttons are something I made on my old blog Valentine Bonnaire and I joined Facebook first in something like 2009 as my nom de plume. Twitter under my nom de plume just as I had that blog in here.  So, it was around that same time I heard of Twitter and I joined that too.  In 2016 something happened.  I’m still not sure what that was?  I’d like to find out.  So I will talk about all this here in WordPress and show some visuals on that too.

Yesterday I was reading a piece on the Orwellian qualities of these tech giants, and all of us are watching the news?  On this.

For me WordPress has always been human.

So anyway,  I was @bonnaire.  For years.  Let me show you some proofs of that, and it will take editing this post from two different computers. 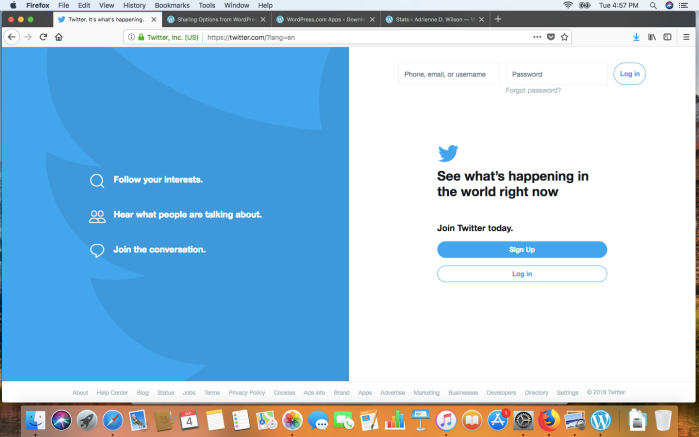 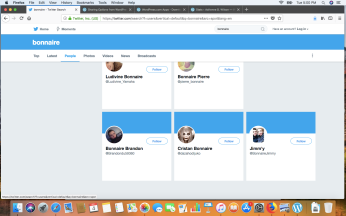 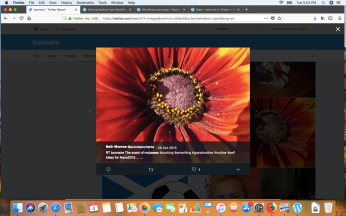 From this new Mac, @bonnaire only exists as that flower.  Well, whatever.  I exist on Amazon because I have a book for sale in there.  Yesterday I was thinking after talking to the Happiness Engineers here, that maybe when my domain name expired, I couldn’t log back in to Twitter?  At the time I felt it was censorship?  Was it or not?

During the election that was very toxic I read the Assange tweets off Wikileaks.

So, I’m not sure how I feel about all of this, as an American.  I can tell you one thing as a Californian, I trust Matt because he is a Texan.

I was using my Twitter during NaNoWriMo and having a ton of fun in 2009 when I wrote a first novel there.  I am VB-Demoiselle in there, and the novel I’ll be working on, as memoir this year is about 20 years working for the newspaper industry.  It will be about the merger and buyout era years 1981 – 2001, what that was like and so forth. So, here in WP we are all different ages, demographics and so forth.  What unites us is that we are writers?  ❤